30 Jan
Joint service at The Chapel 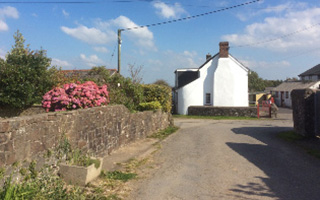 Welcome to Parkham. Moving south from the sea the parish includes the hamlets and villages of Northway, Horns Cross, Foxdown, Hoops, Newhaven, Goldsworthy, Parkham Ash and Broad Parkham. The parish consists of approximately 830 people and 300 dwellings.

A huge thank you to the community for your overwhelming support and powerful consensus at the Allardice Hall in July this year. A Community group naturally evolved as a result and it has been full on; looking into the scale of current and potential expansion and the plight on our village. Please see the Parkham development link for further information which has led to a presentation with our Member of Parliament and Devon County Councillor in return, providing us with their full and unreserved support.

Representations from a resident were heard about a quiet lane.

Declarations of Interest.  Councillor Mrs Beer had requested a Dispensation in matters relating to her membership of the Public Open Space Steering Committee.  The relevant document was handed to her by the Clerk.

The Minutes of the Parish Council meeting held on 18 October were approved and signed as a correct record.

Reports were received from County Councillor Wilton-Love, on behalf of the Stanley Court and Public Open Space development.  Councillor Richmond-Price gave an update on the arrangements to celebrate the Queen’s Platinum Jubilee.

Councillor Smart proposed that the Parish Council join the Parish Paths Partnership and this was approved.

Finance; two requests for a donation were considered and approved. All payments were approved.

Councillors agreed that the Legacy monies should be reinvested for a further six months.

Seven items were discussed and considered under Matters Arising from the Minutes.

Two items of correspondence had been received.

Items raised by Councillors Slee and French were discussed and it was confirmed there was sufficient grit salt in stock for the coming Winter.

Clerk’s training.  Two courses had been attended and a written Report had been circulated to Councillors.

Two items were raised under Urgent items raised by the Chairman.

The meetings for 2022 were agreed.

The next meeting will be on Monday, 29 November in the Allardice Hall at 7.30pm.  The 2022/23 budget will be set and the Precept agreed. For more information :Click here

For more notices about events see the notice board page. Click Here.