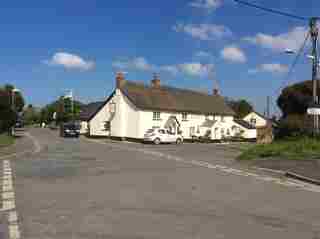 Many people in the village and parish of Parkham will remember with considerable sadness that day in Febrary 2017 when a fire destroyed the The Bell Inn and the home of the Sanders family.

With support from the parish council the trustees of the village hall created a facility in the Allardice Hall for the Bell to continue it's business albeit on a reduced basis.

Since April 2017 the hall bar now 'The Inn Over The Road' has been a place for locals to meet for a drink on a number of days each week. In addition it has been a home venue for both men and ladies darts teams, the Euchre team, Putford football team and the skittles team have had an adjacent bar to the skittles alley. However this is now coming to an end as work on the rebuilt and refurbished Bell is nearing completion.

The main contractor for the refurbisment is Grills of Torrington. Anthony Grills, owner and MD of the company has shown a very personal interst in the project as he lived in Horns Cross and went to school in Parkham. That personal interest is shown in the attention to detail and the obvious pride in the finished project. The publicans, Mike and Rachel Sanders were also very pleased to have local surveyor Lester Bird apointed by the insurers as project manager. He defunately has a personal interest as a customer!!!

Passers by in the last few weeks will have seen the scaffolding removed and the beautiful new thatched roof revealed. The 'eyebrows' over the windows on the front of the building add to the splendid refurbished building that has been created.
Structural work will have been completed by the end of July. Fitting out, furnishing and recruiting a new team will continue throughout August with an opening date in early September to be announced shortly.

The refurbished Bell will hold a number of surprises for those who knew it in the past. Including a number of features that were previously hidden. Layout is quite different with kitchen, toilets and living accommodation in new locations. Users of the Bell will be pleased to see the old long case clock has been saved from the fire and has been rebuilt in a new position.

Changes have been made possible partly with a grant from the EU, the application for which was supported by a number of members of the community, the Parish Council and the Hall Trustees.

The Inn Over the Road will be open for only three occasions in August while Mike and Rachel are busy preparing for the opening of the refurbished Bell, this is now confirmed as Wednesday 3rd October. The last occasion will be Friday 17th August and will be a celebration of the time in the Allardice Hall and preparation for the excitement of the opening.
More information and photographs can be seen on the facebook pages of The Bell and Grills.