The end product can now be seen on the green and hopefully people will agree that it is beautiful piece of design and craftsmanship which will last for many years.

The green as it is today is relatively new, although the horse chestnut tree was planted in 1937 to commemorate the coronation of George VI. as a donation from a lady called Miss Higginson who lived at The Sanctury.While Pound Meadow was built in the late 90s the area in front of the church was used by the builders as builders compound but when this was completed the new 'Green' was conceived and created. The following is an account by Tony Cathcart of the development of the green. 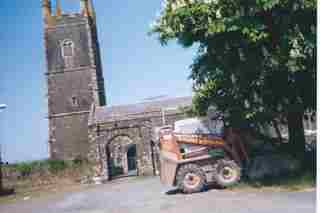 During the construction of the development of Pound Meadow in 1999/2000 the area now known as the Village Green was no more than a lovely Horse Chestnut tree and a turning area for tractors. However it then became an area for the contractors to leave their machinery.

Once the development was complete in late 2000, early 2001, the Parish Council along with numerous parishioners got together to re-design and develop the area.

The main and most knowledgeable person was Andrew Nell. This was simply because of his vast experience during his working life in engineering.

Plans were drawn up which included removing all the ugly overhead cables that stretched right across the frontage of St James' church.

Arrangements were made for the said cables to be buried underground and of course that's where Andrew's expertise and knowledge was put to good use.

The grass area was extended and laid as it is now with the round iron seat purchased and placed around the Horse Chestnut tree along with the ornamental period lamp post. This was sourced by both Councillor Tony Lang and Len Rhodes a resident at that time in Pound Meadow.

Whilst this project did receive grants, the amount given was not sufficient enough to have the work carried out by experienced contractors and a request was made for volunteers.

The work involved was laying tarmac over the now underlying cables.

Councillor Len Rhodes then designed and personally hand carved the Village Sign. He was also very instrumental in obtaining the planters in front of the church which at that time were very much in keeping with the existing furniture and of course the church. The project was completed in 2003. 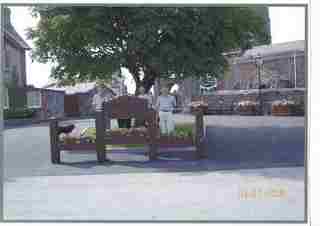